The world was in chaos. She just knew it was, Catherine could feel it as she plainly watched the suspect she had been keeping an eye on for the past week, pull out his gun on her partner. In the middle of the day, at a coffee shop and silently Catherine thanked whoever was watching over that her partner was outside drinking the coffee. “Shit,” Catherine mumbled in her squadron car and reached for the small communicator on her dash to alert dispatch. Once they were notified, Catherine got out of her car and quietly moved around to the back, pulling out her own gun while simultaneously keeping her eyes on the suspect. Thank goodness she came up with the idea of wearing an earpiece even if she was only across the street, she had to make sure her partner was protected at all times. If she even slightly suspected he was going to shoot her partner, she would make sure to pull the trigger first.

She didn’t know how the suspect knew, but once Catherine was a little over a foot away from holding him at gunpoint instead, her suspect noticed her and took off running, leaving the brunette detective to chase after him. “Stop!” She yelled as she ran full force, dodging the obstacles in her wake. Her suspect was throwing down trash cans, bikes, even people, to slow her down but the Detective was always ahead by jumping or moving just in time. “Anderson! Flank him!” She called out hoping her partner had the same idea to chase after him as well but she didn’t have time to check and see if he was, she could only go on hope. When she saw her suspect climb over a wooden fence, Catherine gritted her teeth and pushed harder. Due to her size, climbing over fences didn’t always go well for her and often times she would lose the criminals she was chasing but not this time, for the brunette was determined to keep up. With adrenaline she wasn’t sure she had by now, Catherine hoisted herself over the fence and jolted herself right behind her suspect. The chase began again only this time he rounded a nearby corner where thankfully her partner cornered the man they were chasing. “It’s over Williams,” Catherine began a bit breathless from her run “Just turn yourself in now and I might sweet-talk the judge into lightening your sentence.” She, of course, was lying.

“In your dreams pig,” Williams spoke.

“Chandler! Chandler!” came the most obnoxious yelling from her captain as he tried to gain her attention.

Blinking Catherine focused her muddy pools on those of blue and sighed, “Sorry, I kept thinking about what happened to Bryan..” She said half honest.

Her Captain nodded but the sadness in his eyes told her that he wasn’t going to ask her for the hundredth time what happened earlier. “Yes, it’s a tragedy but Bryan is going to pull through. He was lucky and it missed his heart by a couple of centimeters.” Came her Captain's reply, “However, since he is going to be out a couple of weeks, I am going to bring someone in and they’re going to be assigned with you. For now, have the rest of the day off and I’ll see you in the morning.”
Catherine couldn’t say another word for her mind was blank from what she experienced earlier, the gun, the screams and worst of all…the blood. It wasn’t the first time she encountered any of those things but it was the first since he….

Shaking her head, Catherine walked out of the station, refusing to think any more of what happened today. Getting into her car, Catherine first decided that she needed to go home and shower. The image of red was covering her mind she could have sworn her own flesh was covered in it as well. The drive home was in silence, she didn’t care to listen to any of the

music, news or radio hosts she just wanted to get this day over with and it was only going on four pm. Once she was home and showered, the detective changed into something a little more casual that involved a pair of jeans that she absolutely adored, and a simple V-cut shirt. Quickly brushing and drying her hair she also proceeds to apply a light course of makeup on her face before she placed her slender arms into her leather jacket and decided she was decent enough to leave her home to go to the bar not too far. She needed to drink away this evening more than anything else.

Getting to the bar was the same as driving home, silent, alone with her thoughts and memories. The blood she saw today was no different than the blood she had come home to that day, it was dark, sticky, slimy…red...always red and he was to blame. “No, “ Catherine shook her head “He wasn’t to blame for today….” But oh how easy it would be to blame the monster who made her hate seeing the color red now, who made her hate the creatures like him and worst of all, made her hate herself. How could she fall in love with a monster? Someone who enjoyed hurting her time and time again by leaving her home alone while he snuck away to be with the only woman he ever truly loved. “I hate him..” She said with a fire in her soul but as she inhaled deeply she suddenly felt exhausted “But I forgive him…” She wasn’t going to let him have power over her anymore.

Parking her car in an available spot, Catherine noticed how busy the small-town bar was quickly becoming for a Thursday afternoon but some people in this town like to celebrate the weekend a bit earlier or to completely forget this whole week. Today Catherine would be one of them. Quickly walking in, she approached the long wooden bar and took a seat on the stool at the end, having a clear view of everyone.

“Well hello Detective,” The barkeep began with a smile, “What can I get you?”
“A beer, whatever one you have in the bottle and keep them coming.” Came her heavy voice. The barkeep looked at her knowing something was wrong but he didn’t push it and gave her a Bud Light bottle and walked away leaving Catherine to drink her choice of poison all alone.

Halfway through the second bottle, she could feel a pair of eyes on her. Looking up from the uninteresting spot she was observing on the bar, she examined the room, finding no one was looking at her until her own chocolate hues clashed with the same muddy pools that sat at the other side of the establishment. Her eyes observed a man who had styled back black hair, a lean face that grew a small mustache and beard around his pouting mouth and if Catherine was being honest, he looked handsome. His looks were surreal, almost as if he wasn’t….

Looking away from the stranger, Catherine couldn’t believe she had made eye contact with another one of his kind since the night he left. Damn these Vampires, can’t they all just go away and leave her alone?

Out of curiosity Catherine glanced back up to see the man still sitting at the table he was still at but something in his once sorrowful orbs changed to what exactly? Curiosity? Catherine wasn’t so sure but she did know that when she looked away from the handsome stranger the second time, she could feel his gaze on her become more intense and soon she felt a presence near her. Looking up for the third time the small brunette saw the tall, dark and handsome stranger stand beside the stool that was next to her and before he could utter out a word Catherine made sure to get out what she had to say first.

“Listen, I’m not in the mood to listen to lame pick up lines right now so let me make one thing clear, yes you can buy me a beer, no you cannot have my phone number, no I do not have a boyfriend nor do I want to eventually make you one. I came here tonight to drink and by the looks on your face so did you. So you can take that empty seat next to me but we are only going to drink alone together. Do I make myself clear?” Even though Catherine’s words should have been delivered with some sass behind them, she just couldn’t, her heart and mind were both shut down and even though she wasn’t looking for this one, this tall stranger seemed like the perfect distraction for tonight. 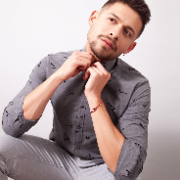 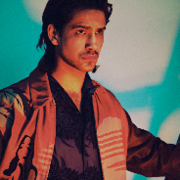 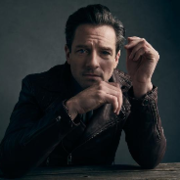 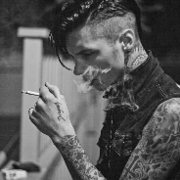